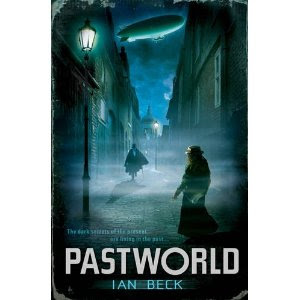 Freezing fog roles along the streets. Horse whinny and steam, market sellers call and beggars ask onlookers for trains. Occasionally piercing the haze are the chimes of steam whistles of locomotives on the railway arches above. This is London, the capital of the British Empire in the reign of Queen Victoria and there is a mysterious killer on the streets, holding the populace in fear and awe in equal measure.

This is the world that Eve has lived in as long as she can remember and has recorded her life’s experiences in her journal*. She lives in a house in the heart of the bustling city, yet only ventures out occasionally when her mentor and protector, the partially blind Jack who appears to become more and more nervous every time they leave home….

It is the mid 21st Century. Whilst society is largely disease free, and freedom is a much touted word, live is becoming ever more controlled and stifling, with any hope of non-conformity and risk quashed. The future, apparently, isn’t so bright you gotta wear shades. It is a world dominated by the Buckland Corporation. Buckland Corporation’s prime source of profit is Pastworld, a Victorian them park offering a realistic experience of the past, with all its sights, smells, hazards and risks. Who knows ,if you go you might just see the scene of a juicy murder, unheard of beyond the dome of Pastworld.

This is the world of Caleb Brown, the son of one of the Buckland Corporation who has been invited by his father on a visit to Pastworld on one of the Corporations. To enter the site he has undergone a indoctrination process and has had all inauthentic devices removed from his person, as well as a warning that the laws of the day were far more rigorous then those enforced in his present.

Ian Becks tale describes the events when these two very different lives come together on the murky streets of Pastworld. And what a tale! The story manages to blend some good old fashioned action with some excellent bursts of atmosphere, a great, slow-burning plot and some good insights onto the human nature, as well as some thoughts on the uses of science.

It follows Eve’s development as she discovers that the world she knows isn’t real, and that she is possibly one of the most important people in the park.

It follows Caleb as his dull visit with his farther turns to nightmare when he is accused of murder by the police and has to run, falling in with Bible J, a resident of Pastworld and master pickpocket.

It follows Constable Catchpole as he struggles to find Caleb and his farther, as well as unravel the mystery surrounding Eve and his superiors, all the while working with the constraints of Victorian technology.

It follows the Fantom as he and his personal army of ragged men (thieves and beggars) stalk the streets, seemingly killing at random but unwinding an agenda all of their own.

And it does all of this to the glorious backdrop of an intentionally Dickensian and atmospheric Pastworld, with its blend of locals and “Gawkers” tourists coming to escape the humdrum of the outside world and experience the risks and thrills on offer in the “authentic” recreation of the past.

I thoroughly enjoyed the book, and whilst it comes to a solid end, (Spoilers!) it leaves enough ends open for a sequal. If so, I look forward to receiving my ticket back to Pastworld and hope that you too will come along on the journey if this review caught you imagination!

Good Evening to all.

*the book from Eve’s perspective is mostly written in the form of this journal and is printed in a flowing script, providing breaks from the standard font and adding to the ambience of the book that it holds from end to end.

P.S. Also well worth looking at is http://www.past-world.com/ , which is done (for a website) in a deliberately olde-worlde style to match the book it publicises.